Oh those kids! Remember the amazing Pittsburgh CAPA students who testified at the school board hearing in December about arts education? [“All They Want for Christmas … Is Art Education”] Not only did the Washington Post pick up their story, but now Governor Wolf is listening to them, too.

Here’s a report from Yinzercation steering committee member, Kathy Newman, who helped to organize the student testimony: On Thursday, February 26th five sleepy but excited CAPA students waited in the chilly dawn to get on the Education Justice bus to Harrisburg. United with a group of activists from One Pittsburgh, the Pittsburgh Federation of Teachers, the PA Interfaith Impact Network (PIIN), Action United, Yinzercation, SEIU and 32BJ, they were ready to bring a message about education funding and sustainable community schools to the state capital.

This CAPA group got its start when Margaret (Meggie) Booth, president of her National Arts Honor Society, and fellow CAPA student William Grim, decided that one of their projects this year would be using art to advocate for more state funding. They made over 100 watercolor postcards, and asked their classmates to write on the other side of the postcard about why the arts are important. For the action on Thursday the CAPA students fashioned these postcards into a festive mobile banner, and presented it to our new Governor, who seemed thrilled with their efforts – and tweeted it out under his own name! 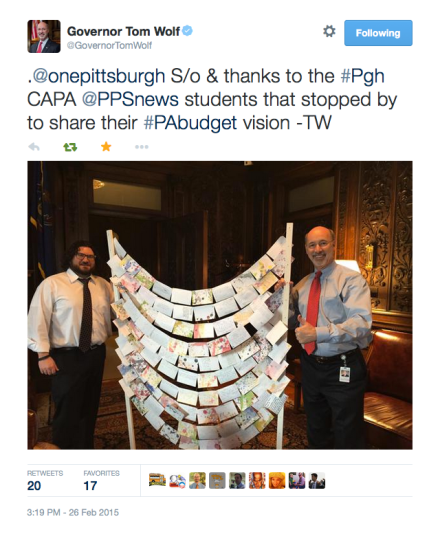 On the bus back to Pittsburgh Margaret and Will reflected on their day in Harrisburg.

As soon as we entered the rotunda of the capitol building, I was amazed by the breathtaking ornate beauty. An elegant marble staircase sat in the middle with gold, silver and glass twisting through every inch of the room. Fluid murals ascended towards the ceiling, directing our eyes upwards. And then, there was the most beautiful sight of them all. The beauty of ordinary faces glistened. The faces of workers, parents, students, constituents. Our voices blended together to form a harmony that demanded an effort to build healthier communities. Our beauty decorated the capital, emulating the words “Wise And Just,” scripted on the ceiling.

Fellow CAPA students and I were there to represent the arts. We wanted to emphasize the importance of arts when talking about a quality education. I was fortunate to be given an opportunity to speak during the rally. This opportunity was both frightening and empowering. The crowd was full of optimism as energy spilled from their smiles. People shouted and shook their heads in agreement. We chanted “Enough is enough,” “When we fight, we win,” and “If we don’t get it, shut it down.”

For me, the most powerful thing about this rally was how it truly encapsulated the power of the people, not just experienced lobbyists and organizers. This rally spoke to the fact that problems in the world cannot be addressed without conversations and collaboration with those most directly affected. Today, it was the people who raised their voices. Today, the people were heard.

The people were heard by representatives, politicians, and perhaps most importantly, Governor Tom Wolf himself. Meggie and I, along with other CAPA students, had each member of the student body state the importance of the arts in schools on a postcard. These cards were first presented to the Pittsburgh Public School Board in early December and then again today in Harrisburg.

The cards, each of which has a hand painted design, were strung in groups of ten and attached to two poles. This was an airy yet influential visual that shared student voices. We had originally planned to display this with the other visuals at the rally but arrived to the news that it would be gifted directly to the Governor.

The CAPA group, along with organizers from OnePittsburgh, headed to the official chambers anticipating the Governor. We were instead greeted with his advisors who assured us that it would go to the right place. To our surprise, it did. A few hours later, Tom Wolf shared an image of himself with our project, thanking us for sharing our voices. Our group hooted and hollered—we had been heard.

Having political leaders that listen to their people is the first step in creating change. When everyone—the students, teachers, workers, organizers, parents—stood together, it was evident we are following this path. Citizens are rising and this generation is acting for the benefit of the next. Being in a room packed with fellow activists was an honestly moving experience. We united as one and as a result, the students of CAPA were heard. Our opinions were shared, our work was validated, and our vision unmasked.

Thank you, Will, Andrew, Sarah, Meggie, and Maya! Finally, I leave you with more pictures from Yinzercation steering committee member Pam Harbin, who went to Harrisburg with the students, to fight for fair and adequate education funding for all our schools. Thank you, Pam! 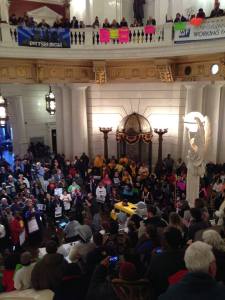