When I left for Alaska ten days ago, parents, teachers, and community members from across the state were still camped out at the Capitol building keeping a vigil for a better budget. The group from Pittsburgh included many ActionUnited volunteers, who worked around the clock. 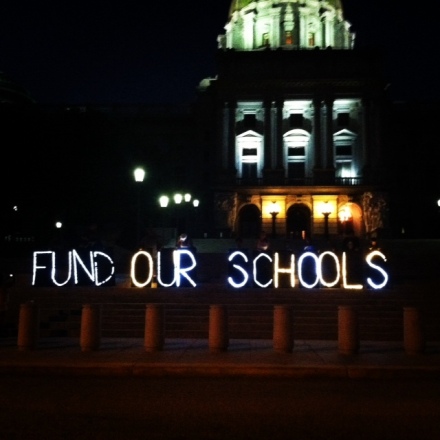 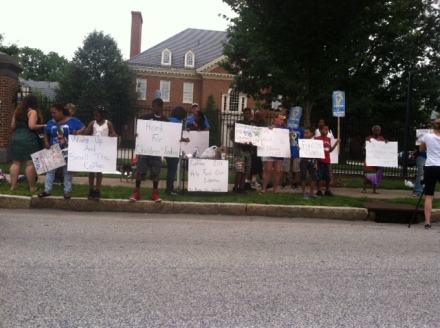 Delivering coffee to the Governor’s mansion to tell him to “Wake up and smell the coffee: you are hurting Pennsylvania’s children!” 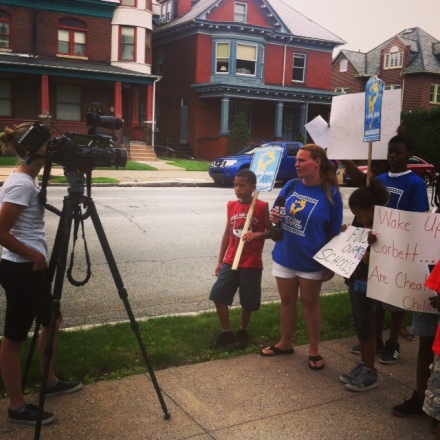 ActionUnited volunteers from Pittsburgh stayed in the capitol around the clock

Having just returned to the lower-48, I fully expected to see news of a final state budget. Oh, but no. In case you haven’t been paying attention, or have been off-line in the wilderness like me, here’s the current situation.

The Pennsylvania legislature has passed a budget – full of problems – but the Governor has yet to sign it. He is currently holding out because he did not get the pension reforms he wanted. Yet if he doesn’t get his signature on the page before Friday, the budget will go into effect without his stamp of approval. [Patriot News, 7-8-14]

Unfortunately, either way, we’re looking at mostly more bad news for public schools. The budget passed by the legislature once again flat funds the basic education line, which provides the bulk of support to school districts. It does increase special education funding by $19.8 million, which is most welcome after six years of flat funding in this area. However, as Ron Cowell of the Education Policy and Leadership Center points out, “it’s important to note that special education costs to districts have risen more than $400 million during that time.” [Post Gazette, 7-5-14]

The budget sitting on the Governor’s desk also includes a slight increase in education funding through block grant programs. These generally come with strings attached and are less helpful to districts that are desperately struggling to provide basic educational programs. The increase is also $141 million less than what Gov. Corbett initially proposed back in February.

Perhaps the biggest disappointment with this unsigned budget is that it relies on unicorns to pay the bills. We just finished the 2013-14 fiscal year last week short by a half-billion dollars. Sharon Ward of the PA Budget and Policy Center explains that legislators “magically wiped away that inconvenient truth through creative accounting.” Then for the new budget, “lawmakers used one-time transfers, overly rosy revenue projections, and accounting tricks to close a $1 billion projected revenue gap.” For instance, this budget assumes that there will be revenue from new gas drilling on public lands – but that will depend on the outcome of a case still winding its way through the courts. It also assumes there will be revenue from a Philadelphia casino that hasn’t even been built yet! [Philly.com, 7-9-14]

This kind of magical thinking is a recipe for disaster. Overall, Pennsylvania collected less in revenue in 2013-14 than it did the year before. Yet the new budget for 2014-15 counts on adding $1 billion more than we managed to take in this past year. [PA Budget and Policy Center, 7-7-14] Where are we really going to get this money?

Having just returned from mineral-rich Alaska, it’s astonishing to me that Gov. Corbett will not even consider a severance tax on Marcellus shale. Every other major gas producing state has one. Our local guide in Juneau proudly pointed to the Alaska Permanent Fund building and explained that every person in that state gets an annual check, usually between $1,000-$2,000, drawn from oil revenues.

Meanwhile, school districts in Pennsylvania are forced to raise property taxes yet again. Last week, just after the House passed the current budget, the Shippensburg school district voted to raise local taxes to make up for the shortfall in state support it had been expecting. [Philly.com, 7-9-14]

Alaska was gorgeous. But I would like to be able to stay here in Pennsylvania and send my children to properly funded schools. We may not have glaciers, but we do have eagles again, right here in Pittsburgh. Now if only we could fund public education.

One thought on “Still no Budget”

Linguists have traced "yinz" back to the many Scots-Irish immigrants who settled Southwestern PA: it's a contraction of "you ones," and is the equivalent of "y'all," an inclusive, encompassing term. German and Eastern European immigrants contributed to a distinctive regional dialect and locals are sometimes known as "yinzers." African American migrants and immigrants from all over the world add to the rich culture of Yinzer Nation, which now proudly stretches throughout Southwest PA and beyond: it's our steel, coal, and glass heritage; it's our blue-collar roots; it's our passion for all things black and gold; it's a Yinzer Thing.
Loading Comments...
Comment
×
%d bloggers like this: