A diverse group of parents, students, teachers, community leaders, and elected officials rallied at Freedom Corner in the Hill District yesterday to mark the 60th anniversary of Brown v. Board of Education. Under a surprisingly scorching sun, one speaker after the next noted that we have yet to see the full promise of that historic Supreme Court case.

Rev. Freeman of the Resurrection Baptist Church in Braddock and President of the PA Interfaith Impact Network, talked about the impact of the 1954 Brown decision on his fourth grade classroom in highly segregated Georgia. He reminded the crowd of about 50 that we are part of a much larger movement for equity and educational justice.

The Post-Gazette featured the rally on the front page of the Local section this morning with a big color photograph. [Post-Gazette, 4-14-14] Here are some more photos from the afternoon:

No More “Gated Communities of Education” 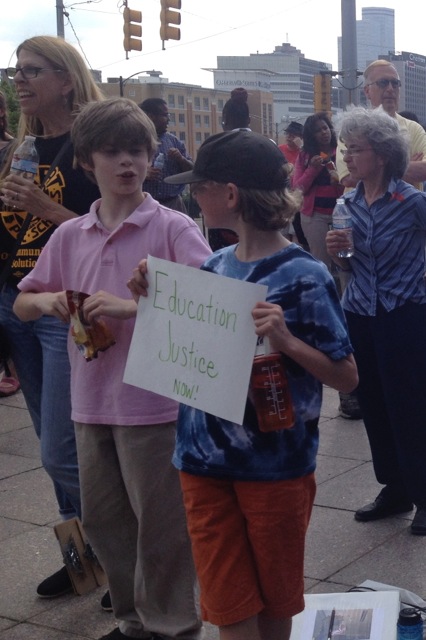 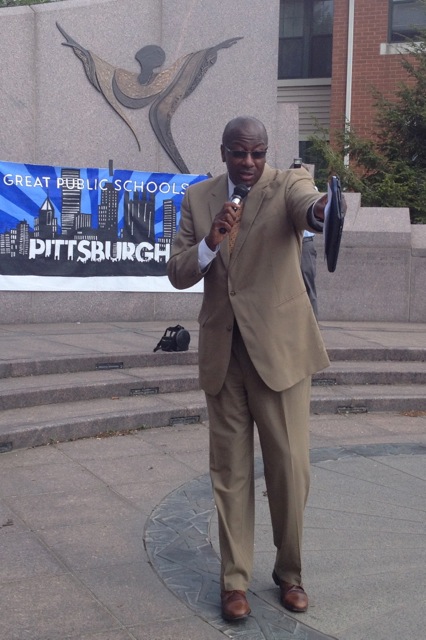 Rev. Freeman talks about racial segregation in Georgia in 1954 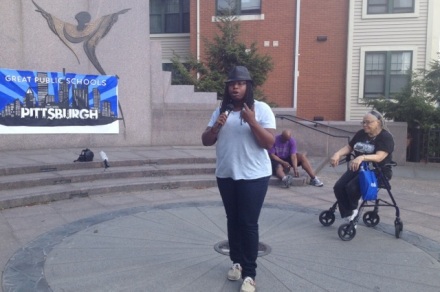 After the rally, groups fanned out to go door-to-door, talking to people about becoming an “education justice voter.” The aim is to encourage folks to get out and vote and to consider candidates on the basis of their support for public schools. Here’s a video from the Media Mobilizing Project in Philadelphia, documenting the kick off of a similar education-voter drive there:

Also this week, the National School Board Association released this video featuring the legacy of the Brown decision in Pittsburgh. The filmmakers visited Pittsburgh Milliones/U.Prep and interviewed me, Dr. Lane, and others about persistent racial segregation in our city:

And another release this week in recognition of the Brown anniversary: the national Journey for Justice alliance just published, “Death by a Thousand Cuts: Racism, School Closures, and Public School Sabotage.” (Journey for Justice is a national coalition of 36 grassroots groups working for education justice. The local partner here is Action United.) This devastating report is heavily documented and also features the results of a “listening tour” conducted in 13 cities earlier this year, including Pittsburgh. It’s worth a close read as we remember the disproportionate impact budget cuts, school closures, and educational policies continue to have on communities of color.

One thought on “Still Black and White After Brown”

Linguists have traced "yinz" back to the many Scots-Irish immigrants who settled Southwestern PA: it's a contraction of "you ones," and is the equivalent of "y'all," an inclusive, encompassing term. German and Eastern European immigrants contributed to a distinctive regional dialect and locals are sometimes known as "yinzers." African American migrants and immigrants from all over the world add to the rich culture of Yinzer Nation, which now proudly stretches throughout Southwest PA and beyond: it's our steel, coal, and glass heritage; it's our blue-collar roots; it's our passion for all things black and gold; it's a Yinzer Thing.
%d bloggers like this: