It’s like a bad case of school closure déjà vu. Pittsburgh has already been through four rounds of closings in recent years, with a total loss of 39 schools. Since 2000, we dropped from 93 to the current 54 schools (that’s a decrease of 41%). And it looks like we will see round five soon, with the district scheduled to run out of money in 2016 and scrambling to find $50 million to address its forecasted deficit.

The district has blamed each round of school closings on population loss. In 1997, there were over 40,000 students in the district; today there are about 28,000. The district actually lists 26,463 students on its website, but its “average daily membership” is 27,945 – and I learned in a meeting with the administration recently that this number does not include our charter students. Since charters are considered public schools, and the district is paying to educate those students, we could reasonably argue that their numbers ought to be included – bringing our total public school population to around 31,000. That’s still a 22% drop over the past 16 years.

The good news is that it looks like our population loss is slowing. Recall the U-Haul truck report last week that Pittsburgh leads the nation in the percentage of young people moving in rather than leaving. [Post-Gazette, 4-19-13] Pittsburgh Public Schools have also managed to hold onto most of the kids in the city: despite what may be a popular misconception, the vast majority of Pittsburgh families continue to choose public education for their children. With approximately 36,000 children aged 3-18 living in the city, 86% are in the public schools.

Yet four rounds of incredibly disruptive school closings have not solved our problems in Pittsburgh. Ironically, just eight years ago then-superintendent Mark Roosevelt was facing a similar deficit of $47 million and convinced the school board to close 22 schools, saying, “We need to get this done and get it behind us.” If only that had been the case. But school closure is hardly behind us. We closed seven more schools in 2011, yet our cost-per-student is still high relative to other school districts around the state.

So what to do? Close more schools? Or can we think about this in a broader context and start to consider some alternative solutions? It helps to remember that this is not just happening here in Pittsburgh. Mass school closings – often pushed by corporate-style reformers with a privatization agenda – are going on across the country. Chicago will lose up to 54 schools this year; Philadelphia 24 (at the same time it proposes opening 13 new privately managed charters); New York City 26 more (in addition to the 140 that have been closed recently); and Washington D.C. is talking about closing 15 schools.

Now unlike some of these places, Pittsburgh does not seem bent on privatizing its schools. But the effects of school closure are the same. Parents Across America (PAA), a national grassroots movement of organizations like ours, summarized it this way: “in city after city, mass closings have done far more harm than good. They do not lead to improved academic performance and they don’t fix budget deficits. Schools that receive students rarely receive adequate time or resources to responsibly address school mergers.” [Parents Across America, 4-2013] And the worst part is that mass school closures disproportionately affect poor students and communities of color, as the following graphic makes clear. [National Opportunity to Learn Campaign, 4-23-13] 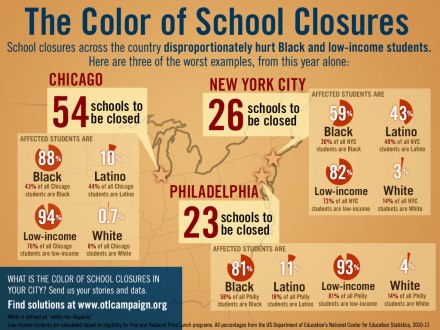 In a review of the recent literature on school closures, Chicagoland Researchers and Advocates for Transformative Education (CReATE) concluded the following. [CReATE Research Brief, 3-2013; results reported by PAA]

Before we go closing down more schools in Pittsburgh, we need to stop and ask ourselves what the consequences will be for our kids and our neighborhoods. That means we will need to think beyond the district’s current financial crisis: we need a bigger calculus that takes into account more than just the school district’s bottom line and recognizes the inter-connectedness of schools and communities.

Want to be a part of that conversation? Plan to join PIIN on Sunday May 19th (new date) for an exciting action on school closure. The afternoon will include a school bus tour of several Pittsburgh neighborhoods impacted by those 39 school closings over the past decade. Stay tuned for more details.

One thought on “Again and Again”