HB 2468 has lots of cheerleaders. That’s the current House Bill under consideration that would expand Pennsylvania’s Educational Improvement Tax Credit (EITC) program, and add a new scholarship program, diverting $200 MILLION in public money to private and parochial schools. (See “One Million Per Day” for the details.)

The voucher-in-disguise bill was introduced by Rep. Jim Christiana, a Republican who hails from Monaca in Beaver County – site of the proposed Shell cracker plant. Just a few weeks before he brought the bill forward, Rep. Christiana received a nice fat check for $25,000 from the “Fighting Chance PA” PAC. That was the single largest contribution from this new political action committee (or PAC) that has already “doled out $225,000 to pro-voucher state lawmakers and other political committees in Harrisburg.” [Philadelphia Inquirer, 6-26-12]

Fighting Chance PA PAC shares a name with a campaign launched by the “Pennsylvania Catholic Coalition” this spring, an effort associated with the Philadelphia Archdiocese, which has been lobbying hard for voucher legislation to fund its struggling schools. The new PAC has been entirely financed by three wealthy Philadelphia hedge-fund founders and their “Students First PA” PAC. That name should ring a bell: they are the group funneling gobs of out-of-state money from the likes of mega-billionaire Betsy DeVos and her American Federation for Children into Pennsylvania politics to support school privatization efforts. (Please re-read “It’s All About the Money, Money, Money” for details of the money trail.)

Rep. Christiana received well over a third (38%) of his campaign contributions so far this year from three pro-voucher groups: $25,000 from the new Fighting Chance PA PAC; $25,000 from the Students First PAC; and $2,500 from Wal-Mart’s school-choice PAC. Christiana apparently “laughed” when a reporter asked if these donations influenced his new tax-credit bill. “I’ve been a strong supporter of parental choice since my first election in 2008,” he said, claiming that voucher groups are merely trying to counteract “the status quo” advocated by teachers’ unions. [Philadelphia Inquirer, 6-26-12

Ah, yes. By all means, let’s blame teachers’ unions for the massive defunding of our public schools. And while we’re at it, why don’t we blame them for creating the insidious national narrative that our public schools are failing in the first place.

What HB 2468 is really about is giving away mountains of public, taxpayer money to private corporations. A new analysis of the proposed bill, released yesterday by the Pennsylvania Budget and Policy Center, found that, “Individual taxpayers are footing the bill for $9 out of every $10 of corporate contributions for private and parochial school scholarships” made through the current EITC program. [PBPC, Analysis of HB 2468, 6-25-12]

What’s worse, companies get a “triple dip” tax reduction, since they can take both state and federal tax deductions for their “charitable” contributions, on top of the state tax credit. That means that a corporation donating at the current annual cap of $300,000 will pay only $20 a year out of pocket. Twenty bucks! And don’t forget, that buys them huge PR in the community. (For example, see how Exxon has done this in “EITC: No Credit to PA.”) 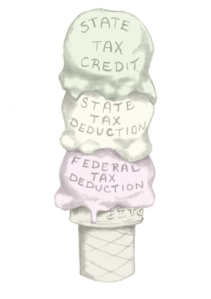 Even more astonishing, a company that contributes to pre-K scholarships, which has an even larger tax credit, can actually receive tax benefits largerthan the total value of the “contribution.” Yes, you read that right. The EITC program can literally net companies income – a reverse flow of public dollars to private corporations. That’s adding insult to injury, as public schools are reeling from massive budget cuts and these tax credit programs channel desperately needed revenue away from our public goods.

You can bet Exxon and many other corporations are waving their pom-poms and chanting, “2-4-6-8, Who do we appreciate?” when they think about HB 2468. Maybe we need to send some real cheerleaders from Pennsylvania’s public schools to Harrisburg where they can explain to legislators the value of public education. They could end with a better chant: “2-4-6-8, Public schools are really great!”